During the Second World War, aircraft manufacturers Arado and Fieseler were asked to develop a carrier-borne aircraft for the under-construction carrier Graf Zeppelin that could deliver both bombs and torpedoes. The Arado Ar 195 was the less successful of the two- based on the Arado Ar 95 floatplane, it was underpowered with only an 830-horsepower engine. The Fieseler Fi 167, was a better performer as from the start as its engine was the same Daimler-Benz 1,100-horsepower engine that was used on the Messerschmitt Bf 109 and Bf 110 fighters. 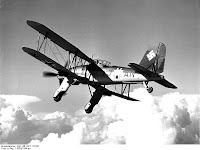 ne design with fixed undercarriage, the Fi 167 was in the same class as the Fairey Swordfish and Albacore torpedo bombers that despite their antiquated appearance, were quite effective in the Second World War. Fieseler's experience in designing the Fi 156 Storch STOL aircraft resulted in the Fi 167 having an astoundingly low stalling speed. Leading edge slats on the wings made it possible to stop the Fi 167 in midair by pulling hard back on the stick and the aircraft would settle in a near vertical drop while still under full control. Such handling characteristics made it ideal for carrier landings.

In addition to folding wings that folded aft in a similar fashion to the wing fold of the Fairey Swordfish, explosive charges could sever the fixed landing gear from the wings in case the aircraft had to be ditched at sea.

At the end of 1938 Fieseler got a contract for the first 12 aircraft which would be pre-production prototypes. Designated Fi 167A-0, the were taken on by an experimental squadron and operated in Holland from 1942 to 1943 in various testing roles which also included camouflage trials. With the eventual cancellation of the Graf Zeppelin, the aircraft were returned to Fieseler and rumored to have been split up between nine being overhauled before being delivered to Romania and the remaining three were kept by the Luftwaffe for test work.