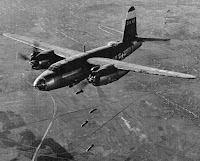 In the summer of 1944 the German forces in Italy were holding a defensive position called the Gothic Line that ran across the Italian peninsula across the Apennine Mountains south of Bologna. Most of the Allied sorties of the MATAF (Mediterranean Allied Tactical Air Force) were focused on the Gothic Line itself but on July 11, a combined offensive headed by Martin B-26 Marauders of the MATAF codenamed Operation Mallory Major sought to break the logistical support of the Germans.

Named for Major William N. Mallory of the Twelfth Air Force who conceived of the plan, Operation Mallory Major was one of the first applications of what today war planners might call "shock and awe". The Germans had massive supply dumps north of the Po River and OSS agents had determined that 22 major bridges across the Po River were virtually undefended and it was across these road and rail bridges that the Germans were supplying the Gothic Line.

The genius of Mallory's plan was to hit all 22 bridges in short span of time before the Germans would realize what was going on and deploy anti-air assets to protect the bridges. With good weather, two B-26 Marauder bomb wings flew 300 missions a day and in the first two days, 11 of the 22 bridges were destroyed and four days after the start of the operation, all 22 bridges were knocked out, cutting off the Gothic Line from their supply bases north of the Po River. For another 12 days, the medium bomber force of the MATAF revisted several bridges to insure that they weren't repaired and put back into use. Although the Germans reinforced the bridge defenses, it was too late as the volume of traffic that could cross the Po had slowed to a trickle, hastening the defeat of the Germans in northern Italy.

Major William Mallory would be awarded the Legion of Merit for his plan but tragically he died when the plane returning him to the United States crashed.