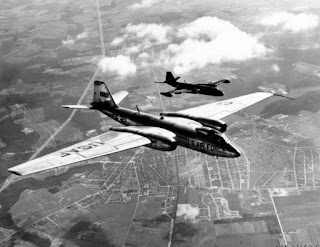 In the early 1950s the Strategic Air Command asked Martin, the American license builder of the English Electric Canberra as the B-57, if a modified version of the B-57 could be built that would operate at altitudes in excess of 60,000 as a reconnaissance aircraft. Though not as radically modified as the better-known RB-57F (which were stock B-57s modified by General Dynamics), the RB-57D was unique in its own right and set the stage for high-altitude reconnaissance operations by its successor, the Lockheed U-2. To operate in the rarefied air of the stratosphere, the most noticeable change in the RB-57D was its enlarged wing which resulted in an increase in wingspan from 64 feet in the standard B-57 Canberra to 106 feet. Special lightening measures were taken from skinning over the bomb bay doors to reduce weight and the bomb bay was used to house the reconnaissance equipment. In addition, enlarged nacelles replaced the B-57's Wright J65 engines with Pratt & Whitney J57s (as were used on the KC-135) which offered a 6,000 lb thrust increase and better high altitude performance.
Despite the massively enlarged wing, an empty RB-57D weight not much more than an empty B-57 due to the lightening measures taken. The most extreme measures were taken with the wings which were thin metal honeycomb sections that formed a full wet wing (even in the leading edges). To avoid the weight of rivets, the wings were assembled with a special glue and the wing skin was waxed for aerodynamic smoothness. With a surface skin of only 0.010 inch thick, even dropping a small tool on the wing could damage the skin. Even deicing fluid used on the aircraft could potentially cause the glue used to lose strength!
Only twenty RB-57Ds were built, but they were built in four groups, each group had a unique set of mission equipment and capabilities that were practically custom-made for missions in specific parts of the world. The first group of RB-57Ds were called "Group A" and "Group B" and only differed in the Group A aircraft being capable of inflight refueling. Four optical cameras were carried in the forward fuselage and a large optical viewfinder was installed in the cockpit for the pilot to use for both navigation and as a viewsight for the cameras. Thirteen aircraft (seven and six respectively) were built to Group A and Group B standards.
The next version was the single Group D RB-57D built which was also single seat and designed for electronic reconnaissance with a nose mounted radar and SLAR built into the lower sides of the fuselage. Capable of inflight refueling, the sole Group C aircraft flew most of its missions over Europe, using its powerful SLAR to peek deep into the Soviet bloc.
The final variant were the six Group C RB-57Ds which were two seaters with a pilot and electronic warfare officer. These RB-57D were designed as electronic ferrets to collect enemy radar emissions for later analysis in the development of electronic countermeasures. These aircraft were also capable of inflight refueling.
In 1956 the newly-formed 4028th Strategic Reconnaissance Squadron was assigned to the 4080th Strategic Reconnaissance Wing to operate the unique RB-57Ds. In the space of a year the 4028th SRS would be moved from Lockbourne AFB in Ohio, to Turner AFB in Georgia, and finally settled down at Laughlin AFB in Del Rio, Texas. Despite being moved three times, the squadron would become fully operational with its first six RB-57Ds only 120 days from the delivery of its first RB-57D. Those first six aircraft, all Group A RB-57Ds, deployed to Japan in late 1956 for reconnaissance missions over what is presumed to be China, North Korea and the Soviet Union. A year after the Japan deployment, three of the Group A RB-57Ds were sent to Taiwan wearing Republic of China markings for further missions over China during the Taiwan Straits Crisis. Flown by USAF pilots, two Taiwanese pilots were preparing to fly RB-57D missions after only 30 days of training, but the plans came to end when both the People's Republic of China and Taiwan began dogfighting each other over the Taiwan Straits.
In  1958 the first atmospheric samplings missions were flown by RB-57Ds in support of nuclear testing in the Marshall Islands, the high flying capability of the RB-57Ds allowed them to get particle samples from high in the atmosphere as part of the post-detonation analysis. At the same time, Several Group B and the sole Group D aircraft were deployed to Europe for missions over Eastern Europe.

The pace of missions put a strain on the delicate wings of the RB-57D and the first aircraft were put into storage by SAC following two incidents when the wings outboard of the engine nacelles cracked and fell off during landing. Martin had designed the wings for only 500 flight hours and many of them had already exceeded that limit but strategic necessity resulted in the RB-57Ds still flying missions. At this point the USAF was planning for the arrival of the Lockheed U-2 and the Air Defense Command took over the remaining RB-57Ds to act as high altitude targets for the supersonic interceptor force. Fitted out with electronic countermeasures, the 4677th Defense Systems Evaluation Squadron at Hill AFB, Utah, was formed to operate 12 of the 20 RB-57Ds. Martin modified the wings to extend their surface life. However, the high flying capabilities of the RB-57Ds meant that the 4677th DSES was always asked to send aircraft in support of nuclear testing.
By 1963 wing structural problems cropped up again when one of the RB-57Ds lost its wing at 50,000 feet. But the ADC still needed a high altitude target aircraft and since the last US atmospheric nuclear test had taken place in 1962, Martin agreed to modify the remaining RB-57Ds for another 3,000 flight hours. Upgrades to the electronic countermeasures to challenge the ADC interceptor crews resulted in these aircraft being designated EB-57Ds and they served in this role along with other testing roles until the mid-1970s.
The big wing and engine power of the RB-57Ds in many ways prepared pilots for what it would be like to fly the Lockheed U-2. On takeoff, only 50% engine power was necessary for takeoff which only needed a ground roll of about 2,000 feet. Climbing at 25-30 degrees, the RB-57Ds could reach 50,000 feet in only 15 minutes. Maximum cruise altitude was 65,000 feet and the pilots wore full pressure suits that were improved for the U-2 and SR-71 programs. With over 200 gallons less than a stock B-57, the RB-57D could fly twice the duration, approximately seven hours compared to four hours for a B-57. Landing was challenging as the big wing didn't lose lift easily. Even with the engines at idle, it was still too much power for landing. Even with the spoilers out and landing gear extended, the plane still had a very low sink rate and pilots resorted to actually holding the RB-57Ds into a series of slight stalls to get the aircraft down to the runway!
Source: Martin B-57 Canberra: The Complete Record