The Very Brief Career of the B-57 with the VNAF 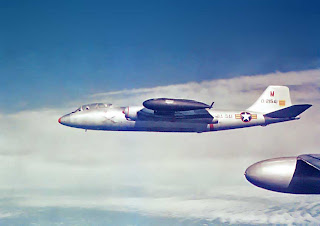 In April 1964 the 8th Bomb Squadron and the 13th Bomb Squadron arrived at Clark AB in the Philippines as tensions in Indochina began to escalate. The Gulf of Tonkin incident was still four months away when the Martin B-57 Canberra jet bombers of the two squadrons took up residence at Clark. In the following month, it was decided that a select group of three South Vietnamese Air Force (VNAF) officers led by Major N. N. Bien would begin introductory training on the B-57 with the two USAF squadrons at Clark. At the time there was a great deal of hesitation on the part of the administration of President Lyndon B. Johnson on supplying the B-57 to the VNAF as it was thought that it would unnecessarily escalate tensions in the area. Despite the prejudicial stereotypes of many USAF personnel of the day on the quality of the pilots of the VNAF, this first group of three pilots turned out to be remarkably proficient and experienced in combat operations as they had all flown combat missions in A-1 Skyraiders and had jet experience from their flight training in France.
As this first group of VNAF pilots were winding up their training at Clark AB, the Gulf of Tonkin incident took place in August 1964 that would bring American combat forces into direct confrontation with the North Vietnamese for the first time. The 8th BS and 13th BS alternated rotations to Bien Hoa AB outside of Saigon and the presence of the B-57s was thought might offset the presumed presence of North Vietnamese Ilyushin Il-28 light jet bombers. The next group of three VNAF pilots were then slated to take "Familiarization Training" with whichever USAF B-57 unit was on rotation at Bien Hoa who would fly their B-57s to Tan Son Nhut Airport in Saigon. Unlike the first three VNAF officers who were proved to be highly competent, this next group of three pilots were more for show than anything else as they were the flamboyant General Nguyen Cao Ky, head of the VNAF (and later Premier of South Vietnam), and two officers that were subordinates of General Ky, one in charge of Ky's security and the other in charge of the VNAF command post in Saigon. Their training was considerably abbreviated and consisted of only three days of ground school, a day and a half of aircraft familiarization on the ramp at Tan Son Nhut, and another three to four days of flying with an American pilot in the back seat of the B-57. As as typical for General Ky, on the the completion of their "training" he took the USAF instructors tiger hunting on elephants in the Central Highlands of South Vietnam!
It wasn't until August 1965 that the formal announcement was made that the B-57 was going to be operated by the VNAF. At a formal ceremony on 9 August 1965 at Tan Son Nhut, a USAF B-57 was flown in and repainted with VNAF insignia and a prominent South Vietnamese flag on the tail. The "U.S. Air Force" titles were removed but were obvious from the shiny areas left behind where the lettering had been buffed off. This B-57 was displayed with all the various armament stores it could carry, including one inadvertently armed 500-lb bomb! Before the ceremony, three dual trainer B-57Cs were flown in from Clark AB in the Philippines and repainted with VNAF markings. General Ky, who by now was the Premier of South Vietnam, and the previously trained pilots were given quick familiarization training to perform a fly-by during the ceremony. Having taken off before the ceremony, each pilot had an American instructor in the back seat. During the formation fly-by, Ky himself had to relinquish control of "his" B-57 to his instructor as he had not been present during all of the previous day's familiarization training. After a spirited fly by and landing, once the B-57Cs landed and were at the far end of the runway and out of sight of the assembled guests, the USAF instructor pilots climbed out of their back seats and the three jets were taxied to the ceremony area by their VNAF pilots and Premier Ky, which of course had the desired propaganda effect. As soon as the ceremony ended, the three B-57s had their USAF markings reapplied and were flown back to Clark AB.
Major Bien of the VNAF, officially in charge of the VNAF portion of the B-57 training, brought another group of 12 pilots and 12 navigators to Clark to begin actual bona fide training in the B-57. Of historical interest, there were also two Philippine Air Force navigators in the group as well as a "gesture of thanks" to the Philippine government for allowing their country to serve as a vital rear logistics area for the war effort. As each VNAF pilot and navigator completed their training at Clark, they were then sent to Bien Hoa with either the USAF 8th Bomb Squardon or the 13th Bomb Squadron (whoever was on rotation at the time) and were paired up with either experienced USAF pilots or navigators to fly combat missions. There were VNAF-marked B-57s based at Bien Hoa AB, but they were few in number and always flown under USAF command. 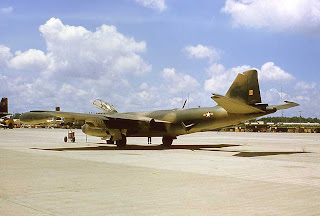 At this point Premier Ky felt that the VNAF B-57 program was not getting the visibility he desired and wanted in order to boost the morale of the South Vietnamese military. On 29 October 1965, the Armed Forces Day for South Vietnam, five B-57s were flown in from Clark and repainted in VNAF markings. Fully armed and fueled and crewed entirely by USAF personnel, the five Canberras took off from Da Nang, struck a suspected Viet Cong base and then flew 300 feet at nearly 300 knots up the main boulevard in Saigon and over the Presidential residence. This gave Premier Ky his propaganda coup even though not one crewman on that mission was a VNAF officer!
Despite this, morale amongst the VNAF contingent in the Philippines was low and USAF instructors were constantly being frustrated by the lack of discipline of the second group which included frequent claims of illness and even complaints about the extreme maneuvers needed in exploiting the B-57's strengths. Matters came to a head when one VNAF pilot crash landed his B-57 at NAS Cubi Point while doing touch-and-gos. But before the issue of morale and discipline could be sorted out, the charismatic leader of the VNAF contingent, Major Bien, was killed in a freak accident when his B-57 diverted to Pleiku AB. Unable to restart his engines due to the inexperienced VNAF ground crew installing the engine starter cartridges incorrectly, the ground crew elected to manually push his B-57 to another area of the ramp for further attention. Unfortunately, the engines powered the hydraulic system and the brakes were inoperable. The ground crew lost control of the B-57 and in an effort to avoid getting injured, Major Bien jumped from the open cockpit only to be run over by one of the main wheels.
With Major Bien's death, the rest of the VNAF contingent at Clark refused to continue with the B-57 program and the USAF closed down the VNAF B-57 program on 20 April 1966, only seven months after the program was publicly announced. The remaining VNAF B-57s were repainted in USAF markings and returned to service with the 8th and 13th Bomb Squadrons in USAF markings and American crews. The most potent aircraft that the VNAF had been given had been an utter failure, a victim of political grandstanding by the South Vietnamese government.
Source: Martin B-57 Canberra: The Complete Record