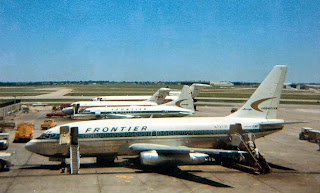 There was a time in the 1970s when Frontier Airlines was the one of the most significant operators of the Boeing 737 and it was on the dependable 737-200 that the airline rose to prominence to challenge the established major carriers of the day. To go from humble beginnings flying second-hand Douglas DC-3s to having the second largest route network in the United States when the first 737-200s arrived at the airline is a story that for the most part has remained hidden to history, overshadowed by the storied legacies of larger airlines like American, Delta, or United.

Frontier's first jets were actually 727-100s styled as "Arrow Jets" which first entered service with Frontier in 1966, becoming the first local service carrier to fly the 727. Route expansions (aided by the acquisition of Fort Worth-based Central Airlines in 1967) and further route authorities granted by the Civil Aeronautics Board brought about the move in 1968 to larger 727-200s. Only a year later in 1969 Lewis Dymond, president of Frontier, retired- at the helm of the airline since 1962, Dymond did much to restore the airline to profitability through the latter half of 1960s that allowed the acquisition of jet equipment. Replacing Dymond was E. Paul Burke. Burke only served at the helm of the airline for a short two years, but his legacy to the airline was his realization in 1969 that the 737-200 was far more suited to Frontier's network than the 727s. The first five 737-200s were ordered as one of his first acts as president of the airline and the 727-100s were traded in to Boeing as part of the payment for the first 737s.

The 737-200s could serve even smaller airports than the larger 727s and this allowed Frontier a more flexible aircraft for its route network- the new jets were at home flying to smaller cities like Scottsbluff, Nebraska or Grand Junction, Colorado just as easily as larger cities like Dallas or Denver. By the time the first 737-200s were delivered, in terms of cities served, Frontier had the second-largest route network in the United States.
The first 737-191s arrived in April 1969 and by 1970 had 10 737-200s on strength with the airline. By the time of Burke's departure from the executive suite in 1971, the 727s were being phased out, with the last of the 727-191s sold in 1972 and as well as the sale of the larger 727-291s to Braniff International. Succeeding Burke would be Frontier's greatest president, Al Feldman. Under Feldman's tenure from 1971 to 1979, Frontier standardized its jet equipment on the 737-200 and entered a period of impressive expansion, profitability and rise to prominence as one of the largest regional carriers in the United States. By the time of the introduction of the final Saul Bass colors in April 1978, Frontier had 32 737-200s on strength with 10 more on order. Frontier's western route network stretched into both Canada and Mexico, from California and Washington in the West to as far east as Michigan and Georgia. Denver Stapleton became one of the few three-airline major hubs of its day, with Frontier ably holding its own against incumbents Continental and United. Undoubtedly it was the flexible operating economics of the 737-200 that allowed Frontier to weather the economic turmoil that hit the industry in the early 1970s. 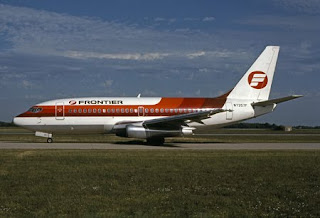 One item of interest was the introduction of first-class legroom in coach class on Frontier's 737-200s. The aircraft were configured for 106 passengers in a single-class layout and it proved to be immensely popular with passengers. It was just one of the many changes Al Feldman implemented in Frontier's service image that formed the foundation for its impressively profitable growth during the turbulent 1970s.

Just to think that there was a time in the 1970s when Frontier flew their 737s into cities in Colorado like Durango and Grand Junction and cities in Nebraska like Scottsbluff and Grand Island- cities that today rate only small regional prop service if at all! A lot of Frontier's 737 destinations in those days today have only small regional prop service. Quite a change from just 30 years ago for these communities!
Source: Boeing 737 (Crowood Aviation Series)