In October 1952 the US Air Force initiated the development of SAGE (Semi-Automatic Ground Environment), an integrated set of radar, SAMs, and interceptor aircraft all tied together by digital computers and long distance telephone links. At the time of the inception of SAGE, there was only one digital computer in existence, the Whirlwind at MIT. Very quickly the SAGE project would eclipse the Manhattan Project in terms of size and complexity as much of the technology had to be developed to develop the world's first integrated air defense system. IBM would win the contract in April 1953 to develop the computers that would be the core of SAGE.

Called Whirlwind II by IBM but AN/FSQ-7 by the USAF, the FSQ-7 was the world's first production digital computer weighing 275 tons with 919 miles of cable, 50,000 vacuum tubes, 7,300 pluggable units and 170,000 diodes. The computer consumed 3 megawatts of power and required 100 operators.

The magnetic core of the FSQ-7 had 256 kilobytes of memory and was supported by 150 kilobyte magnetic drum as well as 4 tape drives each holding 100 kilobytes of data. One-hundred fifty consoles displayed data on circular CRT screens that used light pens to interact with the screen information. With the light 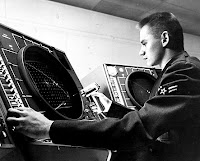 pens, operators could tag radar tracks and issue commands to air defense units. Each of the 24 SAGE director centers built had a large multistory hardened concrete structure housing two FSQ-7 computers- one running and the other one operating as back up to the first. Each of the director centers were then linked not only to each other but to also as many as 100 air defense units by long distance telephone lines.

SAGE was the single most expensive defense project until the development of the ICBM. The first direction center went online at McGuire AFB in New Jersey in November 1956 with the last one completed in 1962. SAGE ran continuously for the Air Defense Command and NORAD until it was decommissioned in 1983.

Much of what IBM learned in the development of SAGE went into its next major computer network project, an airline reservations and booking system for American Airlines that went online in 1960 called SABRE (Semi-Automatic Business Research Environment). Many of the developers of SAGE also went on to establish the ARPANET, the military predecessor of today's Internet.