An act of Congress signed on 12 July 1921 officially created the Naval Aviation Observer to partner with naval aviators on multi-crew aircraft. The same act created the US Navy Bureau of Aeronautics (BuAer) and specified that BuAer's chief must be a qualified pilot or as the newly-created naval aviation observer. As a result, the first Chief of BuAer, RADM William A. Moffett, entered flight training and in June 1922 became Naval Aviation Observer No. 1.

Following the creation of the NAO, duly-qualified crew served in a wide variety of aircraft that required specialized, non-pilot crew. By the postwar period in the 1950s, both officers and enlisted personnel filled roles from bombardiers and radar operators to navigators and flight engineers. Most, however, were enlisted men. For instance, nearly all of the radar operators on the Douglas F3D Skyknight were enlisted or warrant officers. In the heavy attack squadrons, the bombardiers were all uniformly enlisted. 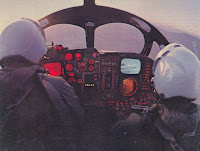 th the arrival of advanced aircraft in the 1960s like the Grumman A-6 Intruder and the McDonnell F-4 Phantom II, the NAOs became indispensable in the operation of the new generation of aircraft. In the A-6 community, the bombardier/navigator (B/N) was considered so vital to the employment of the Intruder that the early B/Ns who were enlisted were converted over to Limited Duty Officer status.

As a result, on 8 February 1965 the Navy's Bureau of Personnel replaced the designation "Naval Aviation Observer" with "Naval Flight Officer" and by 1968, newly-minted NFOs received wings like the aviators only the NFO wings had two crossed anchors.