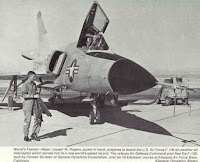 Major Joseph Rogers (known as "Whistlin' Joe") was a Korean War veteran and was at the time the project officer for F-106 integration at the Air Defense Command's HQ. He later would command the 317th Fighter Interceptor Squadron at Elmendorf AFB and after that, headed the SR-71A/YF-12A Test Force. His final assignment with the USAF would be as Chief of Staff for Operations at the ADC HQ.

A placard was placed in the cockpit of 56-0467 when it was assigned to the 329th Fighter Interceptor Wing. The placard read "This F-106 - number 60467 - set a world's speed record of 1525.95 mph over a 15/25 kilometer course Dec. 15, 1959, at Edwards AFB, Calif. Pilot was Major Joseph W. Rogers." Unfortunately 56-0467 was lost at George AFB, California, when the right main tire blew out on takeoff, causing the main gear to collapse. The aircraft was destroyed in the ensuing fire but the pilot, Ken Robken, safely escaped.

Although the F-106's speed record bested by the Lockheed SR-71 just a few years later, the F-106's record still stands to this day as the fastest speed ever attained by a single-engined jet aircraft in the world while in level flight.