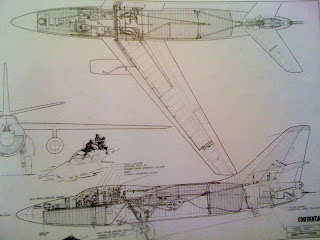 In August 1948 the US Navy's Bureau of Aeronautics sent out a request for proposals (RFP) for a carrier-based long range heavy attack aircraft ("Class VA") as part of Outline Specification 111 (OS-111). The primary mission of the Class VA design was the high altitude delivery of a nuclear weapon no less than 1,700 nm from the carrier which at the time was to be the CVA-58, the USS United States but it was also implied that operation of the design from smaller vessels like the Midway class would also be beneficial. The Navy would get 8 proposals from 7 manufacturers.

Uniquely among the companies that submitted proposals for the Class VA competition, Douglas Aircraft submitted two proposals from two different teams- one from the Santa Monica Division and one from the El Segundo Division. The El Segundo Division's design was designated the Model 593 and rather unusually featured a tail dragger layout for an advanced twin jet design. The rationale for what seemed like an archaic landing gear layout was that on USS United States, the lowered tail meant that the Model 593 could be stowed in the hangar deck without folding the vertical fin. On the Midway class, only a portion of the vertical fin would have to folded instead of the entire fin. The tailwheel layout also offered ease of handing on the carrier elevators as well.

Throughout the Model 593's design process, emphasis was placed uniquely amongst the Class VA submissions to allow operations from as many types of aircraft carriers as possible from the supercarrier USS United States to the Midway class and even the smaller Essex class carriers. The twin jet design that resulted offered more flexibility and as a smaller design was lower in cost.

In March 1949 the Douglas El Segundo design and the Curtiss-Wright proposal were selected for further development. The following month, however, the USS United States was cancelled and the Navy instructed BuAer to modify the Class VA project for operation from the Midway class. As the Midway class vessels were smaller, this gave the lighter and smaller Douglas El Segundo Model 593 a strong advantage over the Curtiss-Wright design. By July of 1949 the Douglas Model 593 was selected as the winner by which point the design had been refined further and the tail dragger layout replaced with a tricycle undercarriage. The Model 593 would go into production as the A3D Skywarrior, vindicating the El Segundo team's gamble.