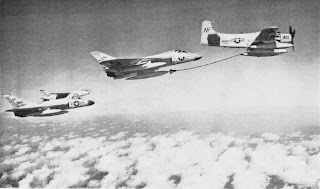 In the early 1950s as the McDonnell F2H Banshee was being deployed by the US Navy, one of its roles was that of a nuclear weapons delivery platform using a special pylon under the left engine. But the weight and asymmetry of a full fuel load and the nuclear bomb meant the Banshee couldn't be catapulted off the carriers of the day. The solution was for the Banshee to take off from the carrier with a light fuel load and once at higher speeds and altitudes, the safety margin increased for such an asymmetric load.

Air refueling was settled upon as the solution to the problem, with special refueling packages being developed for the North American AJ Savage bomber to carry in the bomb bay- the booster jet engine was removed from the lower aft fuselage and the refueling hose and drogue passed through what was the jetpipe. On the Banshee, a refueling probe replaced one of the 20mm cannons in the nose so the aircraft could top off its tanks from a Savage tanker after takeoff. By the end of 1953 AJ Savage tankers were deployed with Banshee squadrons giving the Navy its first jet nuclear strike capability.

It became immediately obvious to the Navy that air refueling could increase safety margins during carrier operations as before, jets could only land with enough fuel for a few attempts at landing before having to divert to a land airfield, or worse, ditch, due to maximum landing weight restrictions. Having a tanker in the carrier pattern allowed aircraft to make multiple attempts at carrier landings. By 1955 the US Navy ordered all carrier based aircraft to be capable of inflight refueling.

Not long after Douglas developed the buddy store which contained not only additional fuel but the refueling hose and drogue in a self-contained package that could be attached to any compatible aircraft in the carrier air wing from the venerable AD Skyraider to the latest tactical jets. In 1957 the first AD-6 Skyraider tanker became operational with the Navy- with the buddy store in the centerline and two wing tanks, the Skyraider tanker could remain airborne during a complete carrier landing cycle to refuel any aircraft that needed additional fuel to make another carrier landing attempt.