27 Years Before the Eagle Was the First F-15 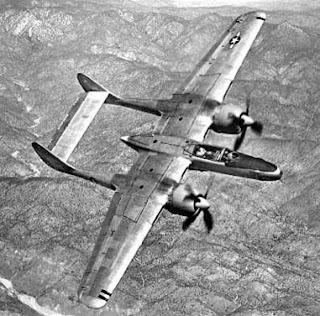 The Northrop P-61 Black Widow, despite having a wingspan of 66 feet and being the size of most medium bombers, possessed a high speed and maneuverability that made it a candidate for further development into a very-long range day fighter. With the war in the Pacific now on the front door step of the Home Islands, there arose a need for a fighter with a very long range to escort the Boeing B-29 Superfortress bombers from their bases in the Marianas and China to Japan and back. The development of the Lockheed XP-58 Chain Lightning was hobbled by troublesome powerplant issues and innumerable deficiencies uncovered in the flight test program for the Fisher XP-75 Eagle meant that the USAAF had to fall back on a long range version of the Thunderbolt, the Repubic P-47N. Not feeling that this was the optimum solution, the USAAF authorized development of twin-seat, twin-engine escort fighter designs to meet the need for a long-range B-29 escort. North American was issued a contract to develop the P-51 Mustang into the P-82 Twin Mustang while Northrop was given a contract to develop a day fighter version of the P-61 Black Widow.
To save time given the pressing needs of the Pacific War, two P-16B Black Widow airframes were pulled from the production line (the aircraft were 42-39549 and 42-39557) to be modified into the XP-61E prototypes. The primary modification was the replacement of the center crew nacelle with a new nacelle that had only 50% of the cross-section of that of the Black Widow. Instead of housing three crew members, the new nacelle sat two pilots in tandem under what was a the time the world's largest single-piece bubble canopy. The air intercept radar in the nose of the Black Widow was replaced with four 50-caliber machine guns which would form the new fighter's main armament. The four 20mm cannon in the belly of the nacelle were retained on the XP-61E. Extra fuel tanks in the new crew nacelle aft of the cockpit gave the aircraft a 1,158-gallon fuel load, nearly double the 640-gallon capacity of the Black Widow. In addition, the XP-61E could carry four 310-gallon external fuel tanks as opposed to the just two external tanks of the Black Widow.
By the time of the XP-61E's first flight on 20 November 1944 from Northrop's facility in Hawthorne, California, the war in the Pacific had progressed rapidly and the landings on Iwo Jima in February 1945 gave the USAAF an airfield that was halfway between its main B-29 bases in the Marianas and Japan. Basing of P-51 Mustangs on Iwo Jima now made the need for an escort fighter with the same range as the B-29 superfluous. However, with the planning underway for the Allied landings on the home island of Kyushu on October 1945 (Operation Olympic) and the landings on the main island of Honshu (Operation Coronet) set for the spring of 1946, a need arose for fast, agile reconnaissance aircraft to map the planned invasion zones and associated targets. While realizing that the reconnaissance need would ultimately be met by the Hughes XF-11 and the Republic XF-12 then under development, the USAAF wanted an interim design based on the XP-61E designated the F-15A Reporter. With an estimated eventual need for 320 F-15As, the USAAF ordered the first batch of 175 Reporters in June 1945 as Northrop's design would be ready much sooner than either Hughes or Republic's custom-tailored versions.

Given that all that was needed was removal of the four 20mm cannon in the belly of the central crew nacelle and replacement of the 50-caliber machine guns in the nose with camera equipment, Northrop had the first XF-15 Reporter ready in only five weeks. The six camera stations in the nose could accommodate 17 different types of cameras in 24 combinations. With the armament removed, the F-15A would have a range of over 4,000 miles with 1,330 gallons (increased over that of the XP-61E thanks to the removal of the underbelly cannons) internally and another 1,240 gallons in the four external tanks. Despite such promising performance, the second XF-15A prototype was not completed until 10 August 1945 due to the need to fit turbosuperchargers to the Pratt & Whitney R-2800 radial engines, the day after the second atomic bomb was dropped on Nagasaki.
With the Japanese unconditional surrender on 15 August 1945, the need for reconnaissance coverage for the invasion of Japan evaporated, but the USAAF recognized the need for detailed mapping of Japan and its occupied territories to support the postwar occupation and reconstruction of the country. As a result, the original purchase contract for 175 F-15A Reporters escaped the wholesale cancellations that swept the US aircraft industry following the end of the war. However, the contract was amended from 175 examples to just 36 aircraft on 21 May 1946. The first production F-15A Reporter was delivered to the USAAF on 4 September 1946. The planned penultimate reconnaissance aircraft of the war, the Hughes XF-11 and the Republic XF-12 Rainbow, made their first flights in 1946 on 7 July and 7 February, respectively. Tail number 45-59302 was the first operational F-15A accepted into service and was named "Klondike Kodak" and photomapping operations were started in July 1946 with the 8th Photo Reconnaissance Squadron based at Johnson AB in Japan. Over the next 30 months the 8th PRS's fleet of Reporters mapped Japan, South Korea, and the Philippines. Only two aircraft were lost in those 30 months, an impressively low-loss rate given the long range nature of the photomapping missions. In addition, the 7th PRS and the 63rd PRS operated clandestine reconnaissance missions from Yokota and Johnson AB in Japan, presumably over Communist-held areas in China, Korea, and possibly over the Soviet Union.

In June 1948, following the establishment of the US Air Force as independent branch of the military the year prior, the F-for-foto designation was changed to the R-for-reconnaissance prefix and the F-15A become the RF-61C (with F now standing for fighter). The 8th PRS, the main unit that operated the small group of Reporters, was redesignated the 8th Tactical Reconnaissance Squadron as a result of the designation change, but by this point Reporter operations were being drawn down with the first aircraft going into storage. The last RF-61C Reporter was stricken from active duty on 14 March 1950, only three months before the Korean War broke out.
The non-operational history of the F-15A/RF-61C Reporter included the use of a single aircraft (45-59318) in Operation Thunderstorm from 1946 to 1947 along with several other P-61B Black Widows. This particular Reporter was disposed of by the USAF in November 1949. The first Reporter prototype (45-95300) was used for another 17 months by the USAF and Northrop on a variety of test programs before it was passed onto the National Advisory Committee on Aeronautics (NACA, the predecessor organization of NASA), where it was operated from Moffett Field, California between 1948 and 1950 to carry aloft various test shapes and scale flying models to be dropped from high altitudes. By 1951 when all other Reporters had been scrapped, this first Reporter went on the US civil register as N5093V and even did a short stint in Mexico as XB-FUJ, both times in an aerial spray role. In returned to the United States in the operation of the US Forestry Service as N9768Z where it was modified with a large fire retardant tank under the central crew nacelle. Operated by Aero Enterprises of Fresno, California, on behalf of the USFS, it was nicknamed the "Pregnant Widow" and was lost when it crashed near Hollister, California during a retardant drop on 6 September 1968.
Source: Air Fan International, September 1996, Volume 1, Number 6. "Northrop Reporter- The first F-15 was no Eagle" by Alain Pelletier, p54-62.
at 21:52