Baptism of Fire; The North Vietnamese Air Force in 1965

Following the French defeat at Dien Bien Phu in 1954 that resulted in the partition of Vietnam in to the North and South, the Ministry of Defense for the Communist north embarked on an upgrade of the country's military infrastructure which included laying the foundation for a modern jet-equipped air force. All the former French and Japanese airfields were modernized to handle jet fighters and by the summer of 1955, nine bases had been made operational. In March 1956 the first group of 110 North Vietnamese flight students were sent abroad for flight training- most went to China, some went to the Soviet Union. One-third of the students were earmarked for fighter aircraft, another third for transport aircraft, and the last third directed into helicopter training. At the end of the year, the Chinese military assisted in setting up local flight training programs at the air bases of Cat Bai and Gia Lam, with MiG-15UTI two-seat trainers soon to follow. By 1958, the Vietnamese People's Air Force (VPAF) had 44 operational airfields capable of operating the more capable Mikoyan MiG-17 "Fresco". Just a year later all primary flight instruction took place in North Vietnam, but advanced jet conversion to the MiG-17 still had to take place in the Soviet Union, the first group of VPAF pilots making the conversion to the Fresco in 1960. A few months later, the North Vietnamese had arranged for a second operational conversion site in China to accelerate the build up of jet fighter pilots. By 1962 the nascent VPAF had 36 MiG-17s as its front-line jet fighter along with a small number of MiG-15UTI trainers. On 3 February 1964 the VPAF established the 921st Fighter Regiment at Noi Bai AB as the first operationally-trained Vietnamese fighter pilots returned from the Soviet Union. It would be quite an accomplishment in just 10 years for a nation as limited in resources as North Vietnam.
Following the Gulf of Tonkin incident on 2 August 1964, President Lyndon Johnson ordered Operation Pierce Arrow which saw Navy aircraft from the carriers Ticonderoga and Constellation hit targets in North Vietnam, opening the first US air combat missions of the Vietnam War.  The VPAF at the time was still not at an operational state to defend against these initial strikes but the perceived American aggression intensified Soviet and Chinese logistical support to bring the VPAF up the strength. VPAF commanders feared the USAF and US Navy would use their numerical advantage and tactical experience to vary their attack patterns, but to their surprise, US forces adhered to very routine and obvious patterns that made planning interception missions easy. Even worse, the Vietnamese could determine the possible target area as US reconnaissance aircraft would make repeated runs against certain areas the day prior to an attack. Continued escalation on both sides resulted in Operation Flaming Dart in March 1965 which then transitioned to the 44-month long Operation Rolling Thunder that would finally introduced air combat over the skies of Vietnam. 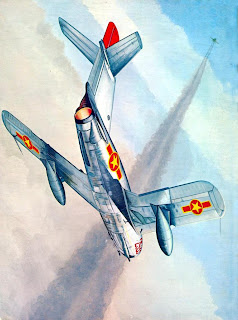 The first strikes of Operation Rolling Thunder took place on 2 March 1965 when a USAF strike force of Republic F-105D Thunderchiefs and North American F-100 Super Sabres hit an ammunition dump near Vinh in the far southern part of North Vietnam and out of range of the VPAF's small MiG force. As the air strikes of Rolling Thunder moved northward over the course of the month, the VPAF prepared for action. On 3 April 1965 the 921st Fighter Regiment went on alert and six MiG-17swere armed and prepared for takeoff. Observing the US reconnaissance flight patterns led the VPAF to conclude the rail bridges at Ham Rong were the target and ground radars were already tracking the inbound US Navy strike force. With pilots already sitting in their cockpits, the order was given at 0940 to scramble to intercept the strike force on the VPAF's first operational combat mission. Four of the MiGs were the "intercept flight", responsible for attacking the Navy strike force. Two more MiGs formed the "covering flight" to follow the intercept group and defend against any attacks. Flying in a "finger four" formation, Pham Ngoc Lan was the flight leader, with Phan Van Tuc as his wingman on the left, Ho Van Quy as #3 on the right, and Tran Minh Phuong in the #4 position. The group raced southward at low level to avoid getting targeted by an over-enthusiastic SAM units and it also masked the group from airborne radar.
Arriving in the vicinity of the bridge, the four VPAF pilots could see a mixed force of Vought F-8 Crusaders and Douglas A-4 Skyhawks attacking the bridge. The four accelerated and then pulled up to gain an altitude advantage against the strikers which had not seen their approach. Pham Ngoc Lan and his wingman zeroed in on a pair of unsuspecting Crusaders. His wingman, Phan Van Tuc, fired his MiG's cannon first before Pham Ngoc Lan had to cut across him to narrow the distance and fired on one of the Crusaders at only 400 yards, scoring hits and an explosion. Believing that another pair of Navy aircraft were closing in on them from below and to the right, Pham Ngoc Lan had his wingman take the lead and Phan Van Tuc fired again, scoring hits on a second aircraft that crashed. It would later turn out after the war that the Crusader Pham Ngoc Lan thought he had shot down was severely damaged, but its pilot, Lt. Commander Spence Thomas of VF-211 from the USS Intrepid, managed to nurse his stricken Crusader to an emergency landing at Da Nang where it had to be written off due to battle damage. Phan Van Tuc's kill was most likely the A-4C Skyhawk that was listed by the US Navy has having been downed by AAA fire. 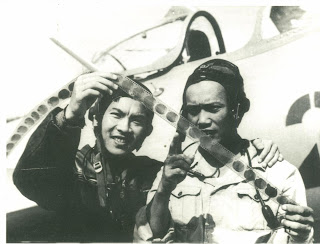 The MiG force was then ordered to return to base before running out of fuel (the MiG-17s were short-legged, particularly as it took a lot of afterburner use in dogfights to maintain speed), but the flight leader, Pham Ngoc Lan, got separated from his men and his compass failed. Having trained in the area during his basic flight instruction, he had a rough idea where he was and with his fuel supply dwindling, he set up to make a crash landing on the banks of the Duong River south of Hanoi. Ignoring his ground controller's order to bail out, Pham Ngoc Lan wanted to try and save the MiG knowing that there were only a small number operational with the VPAF. Missing a sampan by only a few feet, his aircraft skipped along the water and knocked him unconscious before coming to rest on a mud flat. When he came to, he found himself surrounded by a local Vietnamese militia pointing their guns at him, thinking he was a downed American pilot. Despite showing them his identity papers, it took a local village elder to defuse the situation. Given that Pham Ngoc Lan was born and raised originally in the South, his accent made him sound like he was from South Vietnam which complicated matters. Before long a helicopter from his base arrived to retrieve him and the MiG was also recovered and put back into service, a testament to the toughness of the design. Returning his base, he found out that the other men of his flight had managed to land safely.
The aggressive performance of the VPAF that day surprised the Americans as they weren't expecting any significant aerial opposition. However, while the VPAF managed to learn and adapt into facing a numerically and technologically superior adversary in their subsonic MiGs, rigid doctrines and political interference would continue to handicap the US war effort for years to come.  Pham Ngoc Lan would finish out the war with three kills and his wingman, Phan Van Tuc, would finish out the war as an ace with six kills.
Since that day in 1965, the Vietnamese government made the third of April a public holiday called "Air Force Day".
Source: MiGs Over North Vietnam: The Vietnam People's Air Force in Combat, 1965-1975