The 1985 delivery of the first McDonnell Douglas MD-80 aircraft to Seattle-based Alaska Airlines came on the heels of one of the most remarkable coups ever pulled by an airline on an manufacturer to get a good deal. Normally much is made about manufacturers making a crucial sale with an airline, but when it came to Alaska getting the MD-80, the real story was how the airline got a deal that was so good, McDonnell Douglas lost money on the Alaska sale. In 1983, the airline's management formed a team to select a new aircraft that would eventually replace the Boeing 727-100/200 as the flagship of the Alaska fleet. The two candidate aircraft that vied for the contract were the McDonnell Douglas MD-80 and the Boeing 737-300, at the time both new aircraft a generation later in terms of technology and efficiency over the 727s that shouldered the bulk of Alaska's passengers. The scope of the procurement would be the largest order in Alaska's history as prior aircraft purchases were made in small batches, often for used aircraft. The selection process created a tremendous amount of discord in the Seattle headquarters as each aircraft had its proponents for very good reasons.

Many of Alaska's technical staff and pilot corps were pro-Boeing, understandable given that the airline's long history and experience with not just the Boeing 727-100/200, but also the 737-200 as well. The belly cargo capacity of the 737 with its wider fuselage was much appreciated particularly on the routes between Alaska and the Lower 48 states. But the 737-300 was about twenty seats short of the passenger capacity Alaska desired. The 737 variant that met the airline's capacity requirement was the 737-400, but in 1983-84, that variant had yet to be launched (that would happen with Piedmont's launch order in 1986) which was too far in the future for Alaska's timetable.

The McDonnell Douglas MD-80 did meet Alaska's capacity specification and the marketing department of the airline liked the idea of its five-abreast seating which meant each seat row had only one unpopular middle seat. However, the MD-80's narrower fuselage placed significant constraints on belly cargo space. On the routes between Alaska and the US West Coast, belly cargo revenue was nearly as important as passenger revenue. At the time Alaska began its selection process in 1983, the MD-80 program was having a sales drought and there were even rumors in the industry about the MD-80 production line getting shut down. American Airlines' ground-breaking order that saved the MD-80 program was still about a year and a half in the future. This meant that Alaska's order was potentially the most significant yet for the MD-80 program and many in the leadership at McDonnell Douglas were keen to stick it to Boeing by landing a large order with an airline right in Boeing's backyard. Compared to the 737-300 which was selling very well with a healthy backlog, the slower sales of the MD-80 meant that McDonnell Douglas could guarantee a much earlier delivery than Boeing could offer with the 737-300.

The three most important factors for Alaska came down to passenger capacity, delivery timeframe, and the deal clincher, price. And this is where Alaska scored its coup. Alaska's team knew that McDonnell Douglas was not only eager for an MD-80 sale, they were also wanting desperately a big order with Alaska to rub it in Boeing's face. There are four variants in the MD-80 family- the MD-81 was the initial production version, the MD-82 was an increased gross weight version of the MD-81, the MD-83 was an extended range version of the MD-82, and the later MD-88 had an EFIS cockpit (Delta launched this variant). Through the negotiation process as the deal swung in favor of McDonnell Douglas, the company based its planned contract with Alaska on the MD-82 variant. Alaska, however, knew McDonnell Douglas was coming out with the MD-83 and that was the variant the airline really wanted thanks to its longer range. When Alaska's team arrived in Long Beach for the final negotiations, the sales team presented Alaska with a letter of intent for an initial order of six MD-82s. That's when Alaska pulled out their ace card and told McDonnell Douglas they'd only sign to finalized the deal if they got the MD-83 and only if the MD-83s were at the same price as the MD-82. Backed into a corner, McDonnell Douglas relented and Alaska Airlines became the launch customer for the MD-83 variant. The initial order would be for nine aircraft- the first two to be delivered (N930AS and N931AS) were financed by a Japanese leasing agency while the other six were paid for out of Alaska's financial reserves.

In Robert Serling's great book on the history of Alaska Airlines, he relates that once the deal for the MD-83 was signed, the CEO of Alaska, Bruce Kennedy, had to meet with the iconic head of Boeing, Thornton Wilson (or as most people knew him as just "T" given his personality) to break the news. Wilson grumbled to Kennedy "Damn it, Bruce, you know we build better airplanes then they do!" Kennedy responded that McDonnell Douglas was more aggressive on price and that the MD-80's seating capacity more closely matched the 727-200 than the 737-300 did. Serling wrote that Wilson cooled down and replied "Well, Bill Allen (a past CEO of Boeing) told me years ago never to regret a sale on which you would have lost money", something that did happen to McDonnell Douglas with the Alaska deal as they had so deeply discounted the MD-83 to make the sale. 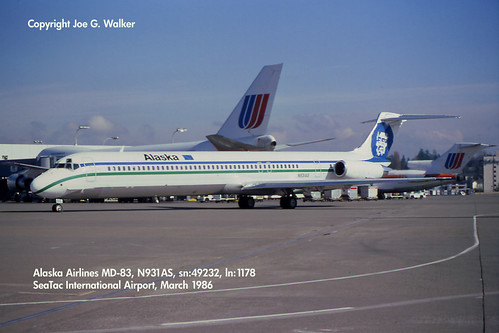 Even though Alaska had signed for the MD-83, the first two aircraft delivered were actually MD-82/83 hybrids- they had the more powerful engines of the MD-83 but had smaller fuselage fuel tanks like the MD-82 get a bit more belly cargo space. The aircraft also had a new heavier landing gear than what the MD-82 had to handle the increased weight. Both aircraft were designated MD-82s, though. The first one delivered was N931AS on 20 February 1985 followed by N930AS on 29 March 1985. The delivery flight from Long Beach of N931AS turned out to be fiasco for Alaska and McDonnell Douglas as technical glitches delayed its departure for Seattle, then the water system on the aircraft failed in flight, preventing any of the toilets from flushing. In addition, to meet Alaska's timetable, the first four aircraft had less powerful engines temporarily fitted than the agreed production standard and that made for a long, slow flight to Seattle.

A total of 48 MD-80s would be operated by Alaska Airlines until the type's retirement in 2008. The most operated at any single time was 44 with one write-off, the tragic crash of Alaska 261 due to a tailplane jackscrew failure in 2000.