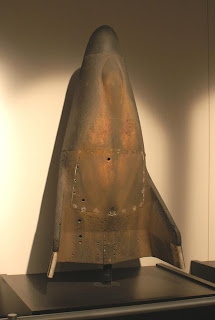 As early as 1957 NACA (NASA's predecessor) was already conducting lifting body research started by Dr. Alfred Eggers of the Ames Research Laboratory. His pioneering work on lifting body applications to re-entry vehicles for spacecraft and missiles led the US Air Force to initiate START- Spacecraft Technology and Advanced Reentry Test. By 1960 Dr. Eggers' work was taken up by several aerospace firms, most notably Martin Aircraft and Northrop to a lesser extent. Within two years, Martin's engineers had come up with their own designs for a reentry vehicle based on a lifting body design. The USAF considered the Martin designs to be possible foundations for either a maneuverable ICBM warhead that could evade Soviet anti-ballistic missile defenses or for a data/film return vehicle for a spy satellite that could maneuver on reentry to a more favorable recovery point. At the time, the first of the Corona spy satellites were operational and used a ballistic reentry capsule to return the film images to Earth. The timing of the return had to coincide with a point in the Corona's orbit that the capsule would hit a predesignated recovery point. A maneuverable lifting body capsule could be ejected on short notice from less favorable orbits and be maneuvered to a recovery point.

In August of 1964 Martin got the contract for the SV-5D PRIME (Precision Recovery Including Maneuvering Entry). Interestingly, it was assigned the X-23 designation after the completion of the program. Research work by USAF historians demonstrated that all contemporary documents of the day used the SV-5D designation.

Only about six and a half feet in length, the X-23/SV-5D had the same lifting body configuration as the later manned Martin X-24 aircraft. With a lightweight and high-temperature tolerant structure of titanium and beryllium, the craft with three types of ablative silcon and carbon-based heat shielding depending upon the expected maximum temperatures on various parts of the vehicle. The centrally-located equipment bay housed the guidance system, telemetry and data units and the recovery parachute system. The equipment bay was surrounded by a cold-wicking system- two plates surrounded a fluid-filled absorbent material. As the heat built up during reentry, the fluid slowly boiled off and was vented overboard as steam.

The only propulsion on the vehicle was a gas jet thruster system for exo-atmospheric maneuvering as well as body flaps for endo-atmospheric maneuvering. The X-23/SV-5D was carried aloft on an Atlas missile launched from Vandenberg AFB in California. Once the Atlas reached apogee, the nose shrouds were jettisoned and the X-23/SV-5D was released to begin its reentry maneuvers.

The first X-23/SV-5D was launched on 12 December 1966 but only pitch maneuvers were demonstrated. However, the recovery system failed at the end of the 30-minute mission and the first vehicle was lost in the Pacific. The second test took place on 5 March 1967 and during reentry at hypersonic speeds, the X-23/SV-5D maneuvered as much as 500 miles on each side of a ballistic reentry path, proving for the first time the work of Dr. Eggers and Martin Aircraft. Unfortunately, it too was lost in the Pacific when it came loose from its flotation collar and sank. The third and last flight took place on 18 April 1967 and the vehicle performed a full series of test maneuvers and was successfully recovered in midair near Kwajalein Island by a Lockheed JC-130B Hercules. The successful recovery of the third X-23/SV-5D allowed NASA and Martin engineers to study the effects of reentry on the different heat shield materials used on the craft. Due to the success of the third test and the partial results from the failed second test, the fourth X-23/SV-5D was never flown.

At one point there was discussion of using the design of the X-23/SV-5D as the basis for an unmanned hypersonic reconnaissance vehicle but the project never went forward. The third X-23/SV-5D is now on display at the National Museum of the United States Air Force in Dayton, Ohio. The data gleaned from the X-23 PRIME project proved immensely useful to NASA and Rockwell's engineers during the design of the Space Shuttle and the USAF used the data in its work on the reentry vehicles for its ICBM force.