The Battle of Kansas Saves the B-29 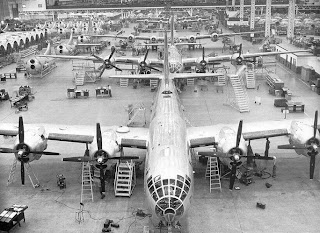 By any measure of the day, the Boeing B-29 Superfortress was a quantum leap in aviation technology which unfortunately came with a lion's share of problems to be resolved before it was committed to combat operations. Keep in mind that when the B-29 was ordered into production, Pearl Harbor hadn't even happened yet and the first flight of the XB-29 prototype was still over a year away. On 6 September 1941 the US Army Air Corps (soon to be the US Army Air Forces) placed its initial production contract for 250 B-29s- and not only were these B-29s to be built not in Seattle but in Wichita, but the USAAC wisely ordered some of the B-29s to be license built from other manufacturers- Bell (at their Atlanta plant) and Martin (at their Omaha plant). Without the United States yet involved in war, the initial B-29 contract caused a firestorm with Congress that went away quickly as the first bombs fell on Pearl Harbor.

As Boeing lacked production space at its Renton, Washington, plant, the USAAC wanted production at Boeing Wichita which at the time was building biplane trainers and B-17 control surfaces. This caused a furor in Seattle, but the USAAC insisted on the security of a plant deep inland given that the B-29 would be a game changer once it entered service. Only the first three B-29s were built in Seattle.

The need for expansion at Boeing Wichita resulted in one of the largest population booms of the once quiet Kansas town. But as the flight test program of the B-29 progressed and the war widened in scope, more B-29s got added to the production order. By January 1944 Boeing Wichita alone had orders for 1,630 Superfortresses. But in that month, the production line was in chaos. Fewer than 100 production-standard B-29s had been completed and worse yet, an assessment by the 20th Air Force found not a single B-29 was ready for combat for a variety of technical reasons. Of those 100 Superfortesses completed and still in Wichita, less than 16 were flyable due to a lack of various components.

The legendary commander of the US Army Air Forces, General Henry "Hap" Arnold was surprisingly unaware of the situation when he arrived at Smoky Hill AAF in Salina, Kansas that January expecting to see off the first B-29 unit to be deployed to the Pacific, the 58th Bomb Wing. To say that General Arnold went ballistic would be understatement! All the available flying B-29s were being used for crew training and as such, many of them weren't even fitted with the defensive gun system let alone any of the other systems necessary for combat. Even worse, there was a shortage of qualified B-29 mechanics to get any aircraft combat ready.

If there was one man who had every right to be upset, it was General Arnold. Long passionate about the need for strategic bombing in any future war, in the face of criticism and doubt he championed the need for the B-29. He immediately placed his deputy, General B.E. Meyer in charge of a crash, round-the-clock program to get the B-29s combat ready. It started in early March 1944 and is known as the "Battle of Kansas", probably one of the most important battles the B-29 has ever had to fight. And it didn't help matters any that back in January General Arnold himself selected the still-under construction 175th Superfortress to be his aircraft and he wanted it ready by March 1st. That aircraft was named "The General H.H. Arnold Special" and it was th last of the first 175 B-29s involved in the Battle of Kansas.

Boeing brought in additional personnel to assist the USAAF mechanics in getting the B-29s combat ready. As these aircraft were already parked outdoors, much of the work had to be done in the bitter Kansas winter with personnel wearing warm high altitude flight suits and gloves which further slowed the work. Assembly line workers were diverted to assist as well as three eight-hour shifts were set up on the Boeing Wichita ramps to get those B-29s ready. Heated tents were set up near the flightlines so workers could take heated breaks from the cold weather. Twenty-four hours a day, seven days a week, for 35 straight days that first group of B-29s were readied for combat in some of the most atrocious winters in Kansas history. By the end of the month, the Battle of Kansas was won. With the coming of spring and the warmer weather, the first groups of combat-ready Superfortresses departed Wichita for the main B-29 training base, Smoky Hill AAF about 120 miles to the north of Wichita. The last of those 175 B-29s left for Salina on 15 April 1944.

In fact, the first of the 58th Bomb Wing's combat-ready B-29s were already heading out to the Pacific on 10 March 1944, their aircraft being some of the first to have been through the Battle of Kansas.