Two Paperclips and an Eraser Contribute to Victory in WW2 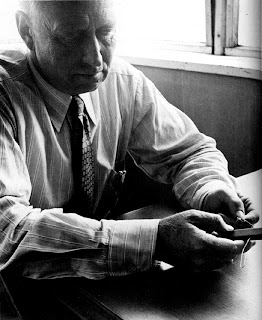 The first variants of the Navy's premier carrier-borne fighter of the first half of the Second World War, the Grumman F4F Wildcat, were hampered by one weakness even before they took off from their aircraft carriers- lacking a folding wing, the first versions of the Wildcat took up quite a bit of space on the carrier and, by extension, that limited the number of Wildcats that could carried aboard. Given combat losses that would inevitably occur, having as many aircraft on the carrier as possible conferred tactical advantages in battle. The current production version of the Wildcat at the time was the F4F-3.
The most obvious answer would be hinge the wings' outer sections and folding them upward as was done on most carrier aircraft (even to this day). However, to Leroy Grumman and his engineering team, that wasn't an optimal answer as that increased the height of the stowed aircraft- if the wing could be folded in a way that didn't increase the height of the aircraft, then extra aircraft could be winched up and stowed up near the ceiling of the hangar deck. Grumman reasoned that the optimum geometry would be to somehow fold the wing back not unlike the way a bird folded its wings back along its body. Grumman drew upon his engineering intuition and reasoned that the wing had to rotate about a pivot point. He took a draftsman's eraser and two paperclips; he bent one end of the paperclips and began to stick them into the eraser. The eraser was the body of the Wildcat and the paperclips were the wings. By trying different angles, Grumman managed to figure out the angle needed to that when the clip was rotated, it folded back flat against the eraser. This was known in engineering parlance as a skewed axis.
In the Wildcat, this axis was a pivot set into the wing root that pointed outward and backward at angle into the moving portion of the wing. As the wing rotated about this pivot, it folded back against fuselage, making the F4F a compact package- so compact, that six F4Fs with what Grumman called the "Sto-Wing" could fit into a deck or hangar space normally occupied by two F4Fs that had nonfolding wings. At first it was planned to use hydraulics to fold the wings, but it was found this added excessive weight, so the wings would have to be folded manually by the deck crew. A large master pin would lock the wing in position either extended or folded. 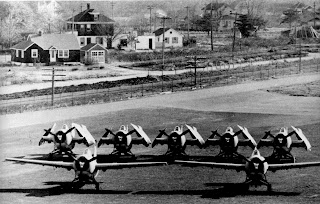 The Sto-Wing was immediately placed into the production line- with the current Wildcat model being the F4F-3, those with the Sto-Wing became the F4F-4. From a tactical standpoint, an aircraft carrier could now carry twice as many F4Fs as before with the wingspan of the Wildcat going from 39 feet to just over 14 feet folded. Deck handling improved as it was easier to move an F4F with the wings folded on a crowded flight deck or in a packed hangar deck. The Sto-Wing concept was applied as well to the TBF Avenger and the F4F Wildcat's successor, the F6F Hellcat. And it's seen today on carrier decks with the Northrop Grumman E-2 Hawkeye- since the E-2 had the dish-like radome above the fusleage, the wings couldn't be folded up and over each other as was done on other long-span carrier aircraft like the Lockheed S-2 Viking. So E-2 Hawkeye's wings use the Grumman Sto-Wing principle to fold back towards the tail.
Source: The Grumman Story