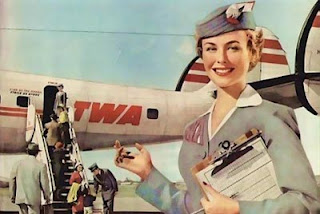 The growth of US postwar air travel didn't reach a point until the 1950s that justified nonstop transcontinental services even though aircraft theoretically capable of such flights were already in airline use at the end of the Second World War. During the course of the war, Douglas DC-4s and Lockheed Constellations seconded to the US Army Air Forces routinely made trans-Atlantic crossings safely. But the exigencies of war are far removed from market demand and in the second half of the 1940s traffic demand simply wasn't there and what passengers did travel transcontinentally were few in number and used existing multistop services. In fact, many airlines believed that passengers preferred enroute stops to stretch their legs. But more significantly, federal regulations prohibited flights more than 8 hours without a backup crew aboard and to the airlines, that increased labor costs on long distance flights. It was more economical to change crews enroute. Of course, TWA and Pan American operated their trans-Atlantic services with backup crews, but this was a matter of obvious necessity.

As air travel numbers experienced major growth in the early 1950s, American Airlines was the first out of the gate with an announcement that it would begin nonstop transcontinental services between New York and Los Angeles once it had taken delivery of its Douglas DC-7 propliners. Eager to upstage American Airlines and its iconic head, C.R. Smith, Howard Hughes had TWA launch its own transcontinental nonstop service on the same route using its new Lockheed L-1049 Super Constellations. On 19 October 1953, Trans World Airlines' "Ambassador Service" Flight 2 departed Los Angeles for New York Idlewild and just barely got into New York under the federal eight hour crew limit at 7 hours, 55 minutes. The westbound Ambassador Service flight had to deal with prevailing winds at altitude and thus couldn't make the flight nonstop within 8 hours- a 15 minute technical stop was scheduled enroute at Chicago Midway to allow for a crew change but no local passenger traffic. 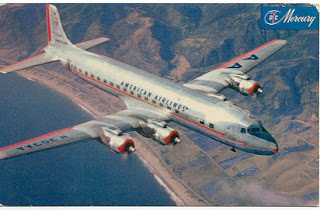 The following month American Airlines inaugurated its own nonstop "Mercury Service" DC-7 flights between Los Angeles and New York Idlewild on 29 November. As the DC-7 had a higher cruising speed than the Super Constellation, the eastbound LA-New York run was made easily in 7 hours, 15 minutes (a fact not lost upon American's marketing department, hence the name "Mercury Service"), but the westbound run from New York to LA couldn't be made within 8 hours. Despite over a dozen modifications to the DC-7s made by American's engineers which included tweaks of the Wright R-3350 radial engines to squeeze every bit of horsepower out of the engines, the DC-7s still couldn't beat the prevailing winds. American's pilot union repeatedly pointed this fact out, but C.R. Smith's influence in Washington left the issue unaddressed by federal regulators. In the following year, federal regulators adjusted the time limit to allow the flight to be made legally and American's DC-7s blocked in at 8 hours, 15 minutes on a westbound nonstop.

Although TWA had reached an agreement with its Super Constellation pilots for overtime pay on the westbound nonstops to eliminate the technical stop for a crew change in Chicago, no such agreement existed with American and following deadlocked negotiations, American's pilots striked on 31 July 1954. C.R. Smith was furious but had no choice to accept an agreement for overtime pay on the westbound Mercury nonstops that exceeded 8 hours. After a punishing 24-day strike, American's pilots returned to work under new rules for transcontinental flights in excess of 8 hours.

Arriving late to the transcontinental battle was United Air Lines. United took delivery of its DC-7s six months after American Airlines but didn't inaugurate nonstop services until 1 June 1954 on it's "Red Carpet" services between San Francisco and New York Idlewild. United's nonstops were eastbound only and rather unusually, westbound nonstops weren't added by the airline until 1955, nearly a year later after the Red Carpet services started.


It should be noted, though, that although these services were operated by Lockheed Super Constellations and Douglas DC-7s, on 3 February 1948 TWA inadvertently operated the first eastbound nonstop when TWA Flight 12, operated by a Lockheed L-049 Constellation, had its regular stops in Kansas City and Chicago Midway canceled due to winter weather and the flight had to continue on to New York, arriving after covering 2,470 miles in 6 hours, 55 minutes.

Source: From Props to Jets: Commercial Aviation's Transition to the Jet Age 1952-1962