An Aircraft Manufacturer Goes Into the Boat Business 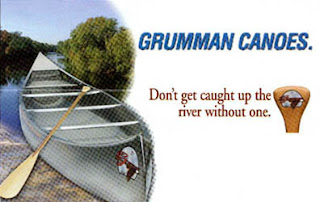 With the Japanese abruptly surrendering following the atomic bombings of Hiroshima and Nagasaki, American aircraft manufacturers suddenly saw massive orders for the planned invasion of Japan canceled. With the wholesale cancellations across the industry, many companies struggled through the second half of the 1940s to adjust to a peacetime economy. One of these companies was Grumman Aircraft on Long Island. During the Second World War, Grumman had built 98% of the US Navy's torpedo bombers flown and 65% of the Navy's fighters used operationally. Leroy Grumman sought alternative markets for Grumman's design and manufacturing expertise to reduce reliance on military contracts. One such market that continues to this day was Grumman's successful line of aluminum truck and bus bodies. But a lesser known direction changed an entire consumer market more than what Grumman could have accomplished in aviation.
Towards the end of the war, one of Grumman's vice-presidents, William Hoffman, was on a short vacation away from Long Island for a weekend on a fishing trip in upstate New York's Adirondack Mountains. As he was portaging his wood and canvas canoe between lakes, he wondered why no one had ever improved upon the design and construction of the canoe into something not just lighter, but sturdier and safer. With his own background in aluminum tooling, Hoffman began to ponder the idea of an aluminum canoe. On his return to Grumman's main facility at Bethpage on Long Island, he pitched the idea of using the company's expertise in using aluminum in aircraft to produce such canoes. Leroy Grumman was impressed with the idea and thought the idea a perfect postwar project for a defense contractor that was having to shrink rapidly. Grumman assigned several engineers to Hoffman, who would head the canoe project. Special aluminum alloy was obtained from Alcoa, and quite by coincidence, Alcoa had an engineer, Russell Bontecu, who was an avid canoeist in his free time and had built several prototypes for Alcoa, but the company wasn't interested. Bontecu's designs were built in sections and weren't commercially viable, but his expertise was valuable and he was hired by Hoffman to help with the Grumman canoe project.
An existing canoe design common at the time formed the basis of the Grumman canoe. The bow and stern were increased in height to allow the canoe to handle rapids and rough waters and watertight compartments were added so the canoe would remain afloat when swamped but could also handle several people while awash as a safety measure. The hull lines were changed to include a flat bottom for better stability and this coincidentally also made it easier for tooling to press the hull forms from sheet aluminum. The structural members of the canoe were made of lightweight but strong aluminum extrusions based on the company's experience with aircraft structures. The prototype weighed in at 38 pounds compared to 64 pounds for a conventional wood and canvas design. 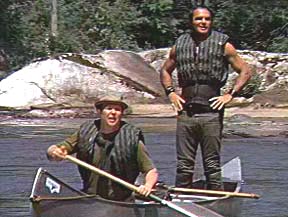 The first canoes were built in employee's bowling alley at the Bethpage facility. The prototypes were then tested thoroughly on the Allagash River in Maine. The canoe's sturdy design allowed it to navigate rapids and over boulders without taking any damage. Exhibited publicly in New York City, the canoes were an instant hit and by 1946 over 10,000 canoes were on order and production had to go to a three-shift basis to keep up with demand. Just outside of the Grumman plants it wasn't unusual to see stacks and stacks of canoes ready for delivery. At one point, over 8,000 canoes were stockpiled right next to a hangar at Bethpage! With the Korean War breaking out in 1951, space was again needed for increased aircraft production and canoe production was moved to upstate New York at Marathon, just south of Syracuse. Demand for the canoes peaked in 1974 with 33,000 sold following the movie "Deliverance", which featured Grumman canoes.
In 1990 Grumman sold its boat division (by this time the company had expanded its boat division into producing other types of vessels) to Outboard Marine Company (OMC). The last Grumman-branded canoe was produced in 1996, but only four months later a group of former Grumman and OMC employees secured financing to relaunch production of the canoes as the Marathon Boat Group which still produced them to this day. A special agreement was established with Northrop Grumman to allow the recognized Grumman name and brand to be used on the canoes. While there are other aluminum canoe builders on the market today, none have ever had the reach and impact on the sport as Grumman has had and today used Grumman canoes are still highly sought-after by enthusiasts, sportsmen, and collectors.
Source: The Grumman Story