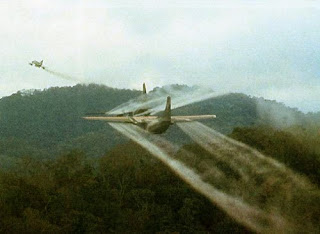 Noted aviation historian Walter Boyne described Operation Ranch Hand as "a heart-rending example of how good airmen can be forced to do unpleasant work when it is determined that the war effort demands it." There are few events in aviation history that evoke strong debates even to this day as those that surround the nine year use by the US military of the defoliant Agent Orange in Vietnam. The aerial spraying of herbicides was used initially in the United States for weed control but was on a strictly limited basis in the immediate post-war period. The first "military" use of aerial herbicide spraying came during the Communist insurgency in Malaysia during the 1950s when the British used it on a limited basis to keep communication lines through the jungle clear.

The British use of air-delivered defoliants was cited by by proponents in 1961 in the proposal presented for President Kennedy's consideration. Supported by the Secretary of Defense, Robert McNamara, the requisite approvals were also secured from not just the President but also President Ngo Dinh Diem and the government of South Vietnam. Some in the administration had raised the issue that use of the defoliants might be considered chemical warfare, but McNamara felt that operational necessity to reduce Viet Cong ambushes and hideouts in South Vietnam made the risk worthwhile. On 3 November 1961 McNamara authorized the use of defoliants in South Vietnam to combat the Viet Cong ambushes on US and ARVN units.

The USAF already had a limited ability already present for the aerial spraying of defoliants as part of its public service work on mosquito-control projects in the southeastern United States. At the end of World War II, a Special Aerial Spray Flight (SASF) was established at Langley AFB in Virginia to undertake mosquito-control spraying. Activated in 1961 for Operation Ranch Hand, the SASF received six Fairchild C-123 Providers for modification into aerial sprayers. Inside the cargo hold of the Provider would be a 1,000 gallon tank connected to spray equipment mounted on the wings that could deliver the herbicides. To the surprise of the commander of the SASF, he found no shortage of volunteer pilots to fly the first Ranch Hand missions despite the proviso that they would wear civilian clothes, fly unmarked aircraft, be on temporary duty to Vietnam for extended periods of time and if shot down and captured, would not be acknowledged as USAF personnel.

There were several different herbicide options, each differing in the proportions of different chemicals present in the mix. Each option was given a color code name. Some of the options available included Agent White, Agent Blue, Agent Purple, but the most widely used option would become infamous- Agent Orange.

Once the first six C-123 Providers were modified, they deployed to South Vietnam and arrived in-theater in January 1962. The aircraft fleet ebbed and flow with the war, peaking at 25 C-123s in 1969. Over 20 million gallons of Agent Orange would be sprayed over 6 million acres in South Vietnam. Unlike a lot of other military experiments in Vietnam that were failures, the use of Agent Orange did work in denying the Viet Cong jungle cover in strategic areas of the country. After a significant decrease in the number of ambushes on US Army/ARVN units in the first year of use, Defense Secretary McNamara authorized an expansion of Operation Ranch Hand to include areas of the Ho Chi Minh Trail used to infiltrate supplies and personnel into South Vietnam, and more significantly, to use Agent Orange for the destruction crops in Viet Cong strongholds to try and limit their food supplies.

The Ranch Hand effort expanded significantly in 1962 as a result as the C-123s wore South Vietnamese Air Force markings (and later in the war, full USAF markings). In fact, the first US aircraft shot down in Vietnam was a Ranch Hand C-123 on 2 February 1962, killing all three crew.

The first protests by North Vietnam were echoed by the Soviet Union and China in 1961 but met with a muted response by other nations. But criticism grew both in the United States and abroad as the program was expanded in 1962 to include crop destruction as the Viet Cong had successfully blended into the local population and as a result, the crops of many "friendly" South Vietnamese were also destroyed. By 1965 scientists in the United States were protesting the use of Agent Orange and the banner was subsequently picked up by the media and the anti-war movement of the day. Three years later, President Nguyen Van Thieu of South Vietnam felt that Operation Ranch Hand was counterproductive but his concerns were overridden by a 1969 report prepared by the American ambassador to South Vietnam with a committee he appointed that showed that the use of the three main herbicides, Agents Orange, Blue, and White, were not harmful. Ambassador Ellsworth Bunker's report quite obviously had the opposite effect and further inflamed the controversy further. Finally, on 22 December 1970 Secretary of Defense Melvin Laird advised President Richard Nixon that any herbicide use should conform to delivery and use standards in place in the United States which effectively ended the use of Agent Orange in South Vietnam. The last Ranch Hand flight flew on 7 January 1971.

Since the end of Operation Ranch Hand, millions of dollars in claims have been paid out by the manufacturer of Agent Orange and the Veterans Administration for the deleterious health consequences of the widespread spraying of the herbicide for nine years. To this day health effects are still being seen in even in individuals a generation removed from those originally exposed to Agent Orange. In fact, when the National Museum of the United States Air Force in Dayton, Ohio, was to put on display a C-123 Provider that had taken more battle damage than any other of its type, it was subject to a political and legal controversy by local environmentalists that resulted in the aircraft being sealed up for display despite the fact no traces of Agent Orange could be found in the airframe.