By 1944, the US Navy's unrestricted submarine warfare against Japanese shipping had reached its highest totals in terms of shipping sunk and it was taking its toll on Japanese industry. As an island nation with few natural resources, Japan was dependent upon shipping for the importation of raw materials and oil for not just its industry but also for it military forces. The Imperial Japanese Army Air Force looked at using transport gliders to bring oil from Sumatra to Japan, but the fuel costs to do so outweighed the volume of oil brought in. The Imperial Japanese Navy, however, with its experience in operating large seaplanes, asked Kawanishi to develop a large transport seaplane to make up for the shipping losses. Kawanishi had already designed and put into production two large flying boats, the H6K (Allied code named "Mavis") and the H8K (Allied code named "Emily"). The H8K in particular was avery well-regarded flying boat design, even by the Allies. Kawanishi had also modified its production flying boats for the transport role as well. The transport version of the H8K was designated H8K-2L Seiku ("Calm Sky") and the company had built 36 for the IJN for transport duties aside from the prototype which was converted from a front line H8K. Most of the defensive positions were deleted to save weight save a 13mm machine gun position in the nose and a 20mm cannon in the tail position. The fuselage fuel tanks were reduced in size to allow for more cargo volume. An H8K-2L could carry up to 62 fully-equipped troops.

The earlier H6K also had a transport version. It didn't have the space or load carrying capability of the larger and later H8K, but 20 aircraft designated H6K4-L were built and another two were converted from former front line H6K4 flying boats. And earlier production run of 18 aircraft designated H6K2-L were primarily passenger aircraft used by Japan's wartime airline, Dai Nippon Kokku. As passenger transports, they could accommodate 18 passengers and had sleeper berths.

Kawanishi's design for a large purpose-designed transport flying boat was designated H11K Soku ("Blue Sky"). Since metal alloys were desperately needed in the production of fighters for homeland defense, Kawanishi's H11K would have been made of wood wherever possible- making it in a sense a Japanese counterpart to the Hughes HK-1 "Spruce Goose". Starting out by scaling up the H8K but having a nearly identical fuselage keel, the H11K was powered by the same four Mitsubishi MK4Q Kasei 22 1,850-hp radial engines, each engine driving a large four-bladed propeller 14 feet in diameter. By comparison, the large Martin JRM Mars had 16 foot, 8 inch four bladed propellers. Most of the wings and fuselage made of wood. Under each wing was a fixed float for water stabilization. The fuselage had two decks- the upper deck had not just the flight deck but also quarters for the crew of five. The lower main deck could accommodate over 80 fully equipped troops, vehicles or an equivalent volume of cargo. To speed loading and unloading operations, the nose had split clamshell doors. Three machine gun positions were located in the fuselage for self-defense.

After presentation of the H11K proposal to the Imperial Japanese Navy, full design work began in 1944 with Kawanishi building a full-scale mockup of the H11K for inspection and review by the IJN at one of its facilities on the west coast of Japan. However, the deteriorating war situation meant that  the full-scale mockup which was nearly completed on was destroyed along with most of the Kawanishi facilities in a bombing attack on 1 April 1945. No further work was attempted on the H11K Soku after the attack.

Some comparisons with other large Second World War-era flying boats to give you an idea of the Soku's size: 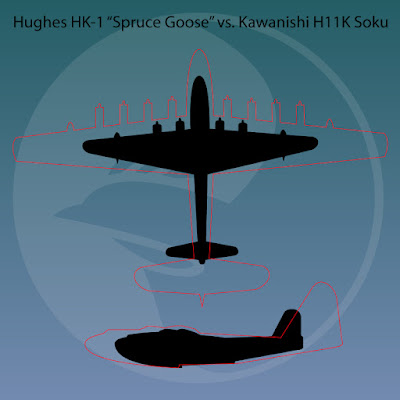 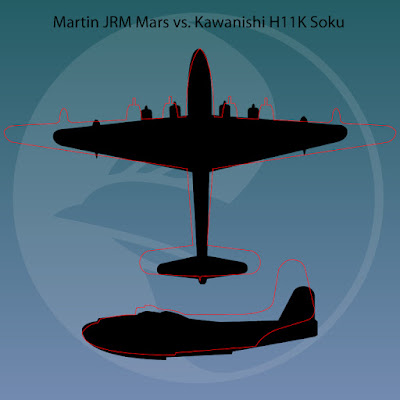