The Spitfire Floatplane That Reginald Mitchell Would Have Loved 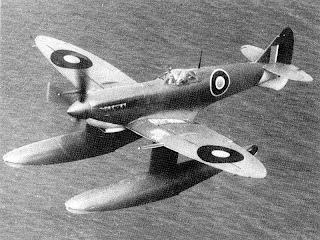 During the 1940 Norwegian campaign, the RAF found itself at a disadvantage with relatively few airfields to operate from during the German invasion of Norway and Denmark, Operation Weserübung. In fact, on the day of the invasion, 9 April, German paratrooper units seized three main airfields in the southern part of the country near the capital, Oslo. The British Air Staff issued a priority requirement for floatplane versions of both the Supermarine Spitfire and Hawker Hurricane that could operate out of the many fjords of the Norwegian coast. Folland Aircraft began work on a Spitfire Mk.I using floats from a Blackburn Roc, but within 24 hours of the invasion, major cities as far north as Narvik had already been seized by German forces. As result, the requirement faded away and the aircraft was demodified and returned to normal configuration. However, the idea of a Spitfire floatplane resurfaced in 1942 following some low-priority work on the concept at Folland that had continued even after the fall of Norway. This time a Spitfire Mk.V was used and this time, specially designed floats were used that were the brainchild of Arthur Shirvall, who had designed the high speed floats that were used in the 1920s and 1930s on the Supermarine family of racing floatplanes that the Spitfire claimed its ancestry. Additional modifications to the Mk.V Spitfire included a four-bladed propeller to replace the stock three-bladed unit and an extended ventral fin below the tail to counteract the reduced directional stability caused by the twin floats. 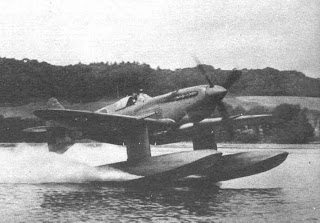 On 12 October 1942 the Spitfire floatplane made its maiden flight from Southampton harbor and initial test flights showed the need for a larger ventral fin. After more modifications, the Spitfire floatplane prototype flew again in January 1943 from Glasgow, Scotland, on its first RAF service trials. Fully loaded, the Spitfire floatplane only weighed 1,100 lbs more and only suffered a 40mph reduction in maximum speed, being capable of 324 mph at 19,200 feet. With a rate of climb of 400 feet/minute, it was less than a stock Mk.V Spitfire, but acceptable to the RAF. Surprisingly, there was only a modest reduction in maneuverability and test pilots found the Spitfire floatplane more maneuverable than any other floatplane. Handing both in the air and on the water was found to relatively easy during the service trials. Other than having to compensate for the torque of the engine on the takeoff run by applying 1/3 to 1/2 rudder, the RAF test pilots felt that the Spitfire floatplane could be easily flown by line pilots.
In the summer of 1943, the RAF began planning for an operation that would utilize the Spitfire floatplane against the German garrisons on the Dodecanese Islands in the eastern Mediterranean off the coast of Turkey. Transport aircraft supplied the various garrisons and the plan was to use Spitfire floatplanes hiding at a small, uninhabited island in the area to attack the transport aircraft. A submarine would be used as a base and house the crews and between missions the Spitfire floatplanes would rest at their moorings next to the submarine under camouflage netting. Folland Aircraft was issued a contract to convert two more Spitfire Mk.Vs to floatplane configuration and after the flight testing of the two newer aircraft, all three three were partially disassembled and shipped to the RAF seaplane base at Fanara, Egypt, on the shores of the Great Bitter Lake. The prototype was found to have serious corrosion in the empannage and was set aside until Folland could ship a new tail to the base. The other two Spitfire floatplanes were assembled and test flown with the work finishing up in November 1943. Operational pilots were recruited from Spitfire crews assigned to the Middle East and they received brief seaplane conversion training on a Supermarine Walrus before converting to the Spitfire floatplanes. Four pilots underwent conversion training for the Dodecanese operation. 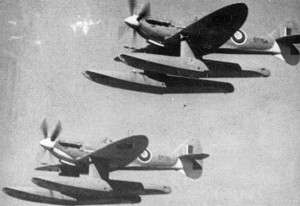 During training on the Egyptian lake, the pilots found that the floats leaked more than hoped and the aircraft had to be hauled out of the water to allow the floats to drain. Not an issue at a seaplane base, but at a submarine mooring on a small island in the Dodecanese Islands, it would be an issue. Pilots also found that the Spitfire floatplane only handling vice was trying to take off in crosswinds over 15 mph which was near impossible. Questions arose as to whether a suitable "secret" location could be found in the Dodecanese chain that would allow more flexible takeoffs. Discussions on the matter eventually proved to be moot as the Luftwaffe reinforced the area just a few weeks prior to the planned start of the operation. The four pilots were released back to their original Spitfire units and the three Spitfire Mk.V floatplanes were put in storage.
It wasn't quite the end of the story yet as during the spring of 1944 the idea of the Spitfire floatplane was re-examined for operations in the Pacific. Once again, the RAF asked Folland to convert a Spitfire and this time a powerful Mk.IX was chosen, making its first flight on 18 June 1944. With a more powerful engine, this version of the Spitfire floatplane could even outperform a standard land-based Hawker Hurricane. However, the pace of the war intervened again as the operational need faded and the Spitfire Mk.IX floatplane joined the other three Mk.V float planes in storage. Eventually all were scrapped, ending the story of a unique Spitfire variant that hearkened back to its roots as one of Reginald Mitchell's inspired Schneider Cup racing floatplanes.
Source: Model Aircraft Monthly International, Volume 9, Issue 12. "Airwars 16: Spitfires on Floats" by Dr. Alfred Price, p4-9.
at 23:51